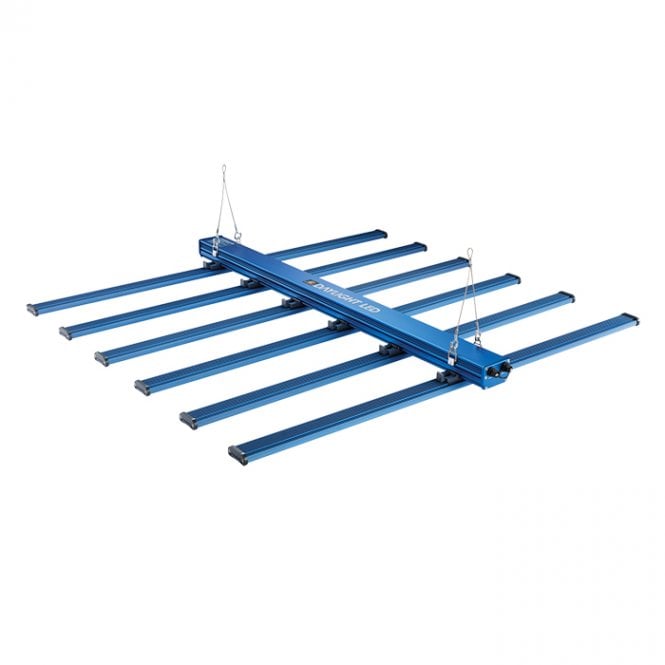 The Daylight 660W LED Grow Light is the second generation of highly efficient, dimmable LED grow lights from leading manufacturer Maxibright, with a footprint of 1.2-1.5m2.

Great value for money and consisting of 6 x 1m LED bars of predominantly Osram white LEDs with the addition of some LumiLED red spectrum, it delivers optimum performance throughout your plants lifecycle.

The new Maxibright Daylight 660W LED Grow Light is the second generation of the first LED from the UKs leading grow lighting manufacturer Maxibright. After extensive testing and development, they have now released the Daylight to the market and it represents great value for money.

The Maxibright Daylight 660W LED uses predominantly Osram White LEDs with the addition of some Lumiled red spectrum to ensure optimum performance throughout the life of the plants.

At 100% output, the unit delivers 1518mol/s which is an overall fixture efficiency of 2.3mols/J but it is fully dimmable to 25/50/75% (without the need to purchase a separate dimmer). It is also iLink ready making it compatible with the soon-to-be-released Daylight Lighting Controller.

Some specifications (from the manufacturer):

Contact us with any questions you have about this product
Be the first to review Maxibright Daylight 660w LED. Write a review
?
x
Compare (1)
Top