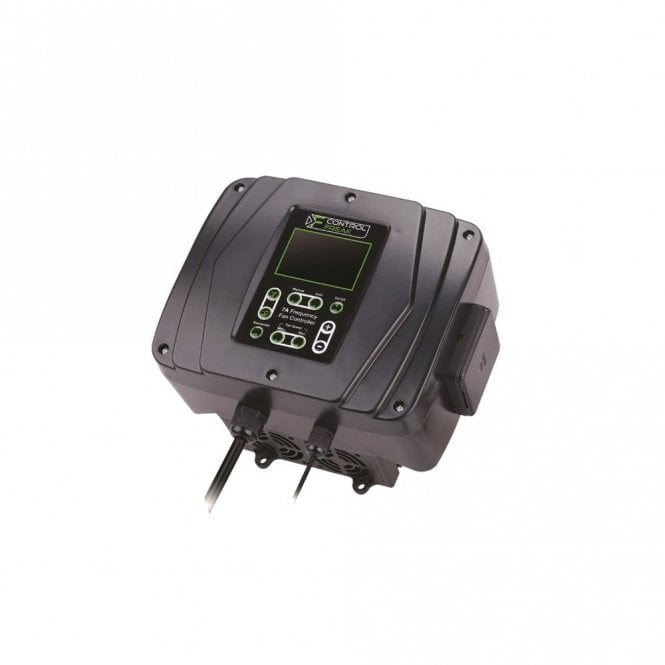 Unlike other controllers, it doesn't hum, and allows for greater energy efficiency and less stress on the components of your fan, extending it's lifespan.

Available in 3A, 7A, and 13A versions, compatible with all AC fans - this really is a top-end product. Highly recommended.

The Control Freak Frequency Controller represents a leap forward in environmental control technology. Previously the options available were either controlling fan speed by resisting the current to the fan or manipulating the voltage delivered to the fan, both of these technologies have fairly significant drawbacks, primarily additional noise from the fan and a limited number of fan speed options respectively. This unit is only compatible with AC fans.

The Frequency Controller effects the supply to the fan by manipulating the frequency of the supply, this results in the flexibility of a resistance based controller (speed control at 1% increments between 10% and 100%) but without any of the associated additional noise (the hum) associated with these types of controllers. The other benefits of controlling the fan this way include greater energy efficiency and less stress on the components of the fan, meaning you will not need to replace your fan as often.

The unit has two plug sockets to control an intake fan and an exhaust fan, the maximum and minimum fan speed can be set if required though these parameters are pre-set to minimum 10%, maximum 100%. The unit also features adjustable bandwidth this basically sets the number of degrees the unit will let the temperature drift up before ramping up to full power, while the temperature is within the prescribed bandwidth the unit will increase the fan speed in smaller increments, allowing time for the adjustment to take effect before speeding the fan up again. It will continue to do this until either the desired temperature is reached or the bandwidth is reached (at which point the fans will speed up to the pre-set maximum.

Therefore to minimise the large rapid fluctuations in fan speed that are not usually desirable we suggest setting the bandwidth somewhere near the maximum (9 degrees).

The thermostatic control can be overridden by switching the unit to manual, this allows the user to set the fan speed at 1% increments between 1% and 100% and it will maintain that fan speed regardless of the temperature of the room.

Available in 3A, 7A, and 13A versions, note these ratings refer to the total load over both outlets.

This really is the top end of the fan speed controller market.

Contact us with any questions you have about this product
Be the first to review Control Freak Frequency Controller. Write a review
?
x
Compare (1)
Top